The best deployment tool I've used for Node.js applications has been shipit combined with shipit-deploy. When I dabbled in Ruby, Capistrano was a very slick tool to manage deployments, and Shipit is very Capistrano-like, which is nice. I know you can use Capistrano to deploy any language/framework, but if you're not using Ruby already, it's an overhead I like to avoid.

For a current basic Node.js prototype I'm building at the moment, the database and schema has been changing fairly rapidly. Since it's a prototype that's not released into the wild yet, I don't care too much about the sanctity of the database, so the simplest way to deal with migrations is to delete the SQLite database file. Picking your battles is important when time is at a premium.

To be able to do this in production, I created a custom Shipit task to delete this particular file on the server. However, this seemed like a thing you didn't want to accidentally do once the prototype has been launched and real user data is on the line.

To alleviate this, I thought I'd ask for confirmation before wiping the database. Capistrano's ask makes this disgustingly easy, but at the time of writing, there's no Shipit equivalent. shipit-captain includes this, but it's a bit lacking in documentation, and additionally comes with three kitchen sinks and a lost puppy.

Instead, we can make use of the splendiferous inquirer.js library instead. It took me about half an hour to integrate this into my Shipit configuration, and it was well worth the time. Here's how:

First off, install Inquirer so we can use it. npm install --save-dev inquirer.

Then, In your Shipit configuration file, require inquirer as you would any other Node module: var inquirer = require('inquirer');

Create a new blocking task where you want to act on user input, and make sure it takes a callback, so we can act on the input when appropriate. You want this to be blocking if it has the chance to affect any other part of the deployment workflow, but if it's a completely stand-alone task, it may be safe to not block. (I'm not sure. I haven't tried. I'm not your dad. Do whatever you want)

Inquirer only has one method, .prompt. This method takes two parameters: one to many question config objects, and a callback. For the full details, see Inquirer's documentation. This demonstration will focus on a boolean yes/no prompt: asking you if you really want to wipe that production database.

As you can see below, we give the prompt a type, a name to refer to later, a default answer (as we're dealing with a production database here, it's probably a good idea to err on the side of caution and set the default to nope), and the question to ask the user.

The answer parameter in the callback will be a single object, with the key we created earlier, wipeConfirmation. This will let us check for the user's answer and take actions accordingly:

In my case, this is what the full Shipit function looks like: 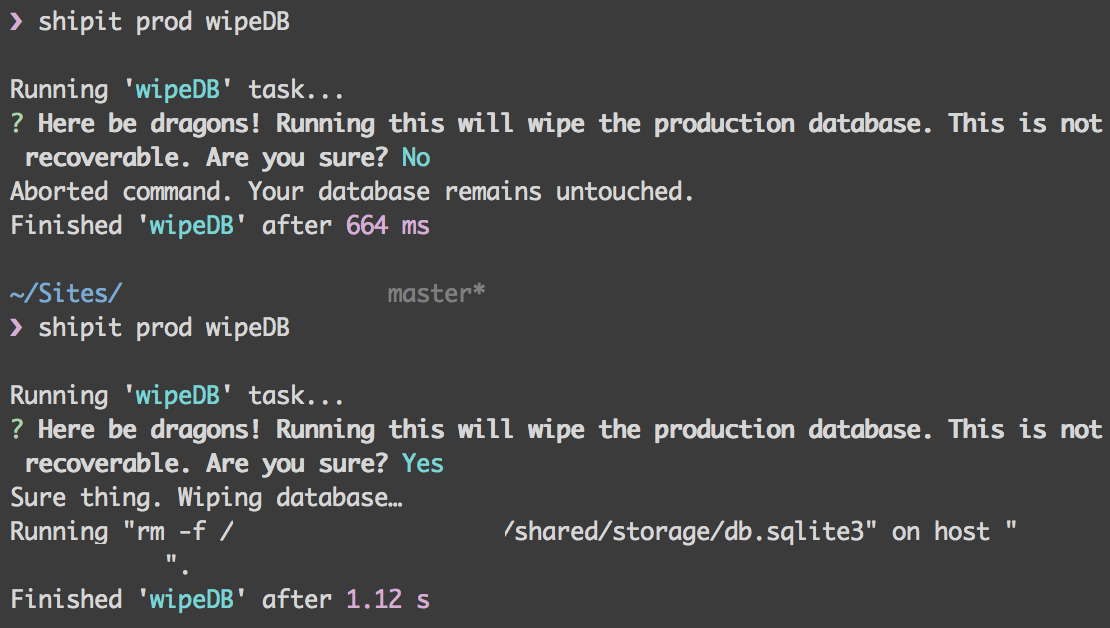 Go forth and run your deployment tasks safe in the knowledge that your users are really sure they wanted to do it!